It was painful putting this video together searching for victims of "mass shootings" to let them know that Rosalind will fight for them and that they will not be the forgotten. Rosalind prays that she doesn't have to add more victims from a mass shooting this point forward.  Unfortunately, Rosalind knows the reality if we do nothing. (updated video pending)

Song selection "I will see you again" instrumental

Song: "I will see you again" vocals and video

Let us join together and adopt the

save as many lives as possible

One America we can rise and join together as One America and pass a  bipartisan- Common-Sense Comprehensive Gun Safety and Regulation Legislation. Rosalind understands that it takes more than common sense gun safety laws and regulations to decrease and stop MASS MASSACRES.

The people of this great country know sensible gun safety is obtainable and understand that reasonable gun safety is also a comprehensive process that includes many issues and solutions. We have to come up with common sense comprehensive measures that will address and handle so many problems like mental health, safer communities, school bullying, and protecting the Second Amendment.

Rosalind will look at the “community made mental illness” that has inflicted upon individuals, especially our young children. They label these children as being different, a loner, strange and mentally ill. Many of these children are often outcast by society, families, schools, and communities. Our society is guilty of playing a role in helping to create a “community-made-killer” in its community, too. This behavior might increase risk of a potential mass killer. Rosalind calls this community- made and societal homegrown mental sickness.  Society labels most of the mass killers as having a medical diagnosed untreated MENTAL ILLNESS. We need comprehensive education in our schools, homes, communities and for all involved.

Rosalind knows that gun safety is a comprehensive approach that needs to involve One America, meaning you! The Russian trolls, fake news stations, and propaganda social media sites will be quick start with the CYBER-WAR, TV campaign of lies, deceit, false propaganda, alternative facts, and psychological mind games, used by the Trump’s administration, and playing Americans against Americans will try to overpower the facts. Come to this website for Rosalind’s stand on gun safety and regulations. Rosalind will maintain America’s Second Amendment of the United States Constitution. We can do this to protect the rights of citizens to keep and bear arms with common sense strict gun safety laws and regulations.

Rosalind doesn’t want to take your rights to bear arms. Rosalind knows we need to work together—fight together—with people from both sides of this controversial gun violence problems. The past is not our future; it is time for sensible, comprehensive gun safety laws and regulations.  Truman states “It is understanding that gives us an ability to have peace. When we understand the other fellow’s viewpoint, and he understands ours, then we can sit down and work our differences.”

We can help combat the problems with the MASS MASSACRES. There is no reason that innocent people be hunted down and killed like wild animals with AR 15 and other such Military-Style Assault Weapons that are so widespread among civilians of this great country.

Rosalind knows if something isn’t done— all the people in this great country need to prepare themselves for more and more BLOODY MASS MASSACRES. The MASS MASSACRES will be more intense and massive number of victims will be murdered. The MASS KILLER’S blueprints are established, and we need to come up with measures to eliminate them (guns, bombs and whatever else). It’s about “how many people they can murder and make history for the killer (s),” this is what the next MASS KILLER (s) are thinking. Rosalind used the plural word killers because there are many more sitting in idle, just waiting to snap. Unfortunately, this is the way of thinking of all the future MASS KILLERS. They are deadly incubators waiting to explode. And they don’t care when, where, and or the location. The next victim could be your child, a family member and YOU.

We can do nothing and keep filling up the graveyards... protests, get more news coverage for several days and then wait for the next MASS MASSACRES... Or we can fight very hard and make changes that will save lives. America let me make this clear, I’ll take the latter. We can get this done together. We must protect our CHILDREN and the people of this great country. And we don’t need Military-Style Assault Weapons to protect our children, only to kill our children and the people of this great country... One America for All American and Non-Americans let put the brutal murder of our children and babies to an END to gun violence.

Rosalind will not be owned and or controlled by the NRA and its Lobbyists. NRA paid for Trump's gun control agenda for 31M in 2016. Rosalind has pledged that she will not take money from the NRA for her presidential campaign to trade for human lives and the president's agenda, the peoples agenda.  Rosalind will not add to the body count for money...to allow citizens and children to be hunted down, brutally murdered, endure disabling injuries, and lifetime mental, physical and emotional problems.

We can together save lives,

gun safety RESEARCH: Articles/Research Studies and Facts (arm yourself with facts and knowledge). Click on links for the full article, source, and author (s). 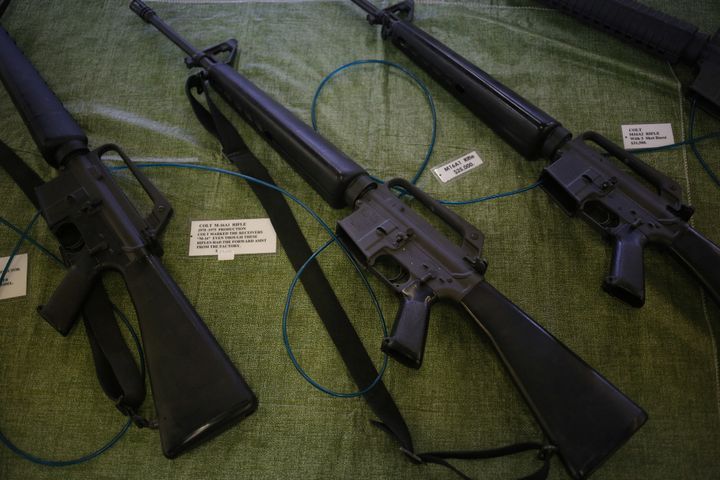 After a massacre in 1996, the Australian government launched a massive firearm buy-back program, cutting gun ownership rates in half. David

WOULD YOU SELL YOUR GUN TO FEDERAL BUYBACK PROGRAM? YOUR FEEDBACK IS WELCOME. SIGN UP AND LEAVE YOUR COMMENTS.

One America for all Americans and Non-Americans who have adopted America as their America! Lets get to work!
CONTRIBUTE VOLUNTEER VOTING INFO

How They Got Their Guns By LARRY BUCHANAN, JOSH KELLER, RICHARD A. OPPEL JR. and DANIEL VICTOR

How Australia Conquered Guns, and Why America Can't